Governor Eric Holcomb a life-long Hoosier, he is a veteran of the United States Navy, was a trusted advisor to both Governor Mitch Daniels and Senator Dan Coats and a former state chairman of the Indiana Republican Party.

Welcome to the Indiana General Assembly website. As one of three co-equal branches of state government, the General Assembly is responsible for enacting the laws by which the State of Indiana is governed. The intent behind this website is to afford you the opportunity to better understand the operation of the General Assembly and its impact on your life and well being. 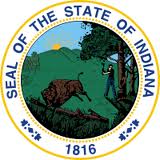 Indiana's state motto is the "Crossroads of America." The state calls itself this because many transportation routes pass through it. This is one of the reasons that Indiana is an important state in the country's commercial activities.

Indiana is an East North Central state bordered by Michigan to the north, Ohio to the east, Kentucky to the south, and Illinois to the west. The Ohio River flows along the state's southern border with Kentucky. Indiana is the smallest state in the Midwest; with the exception of Hawaii, it is the smallest state west of the Appalachian Mountains. Important cities in Indiana include Fort Wayne, Gary, and South Bend.